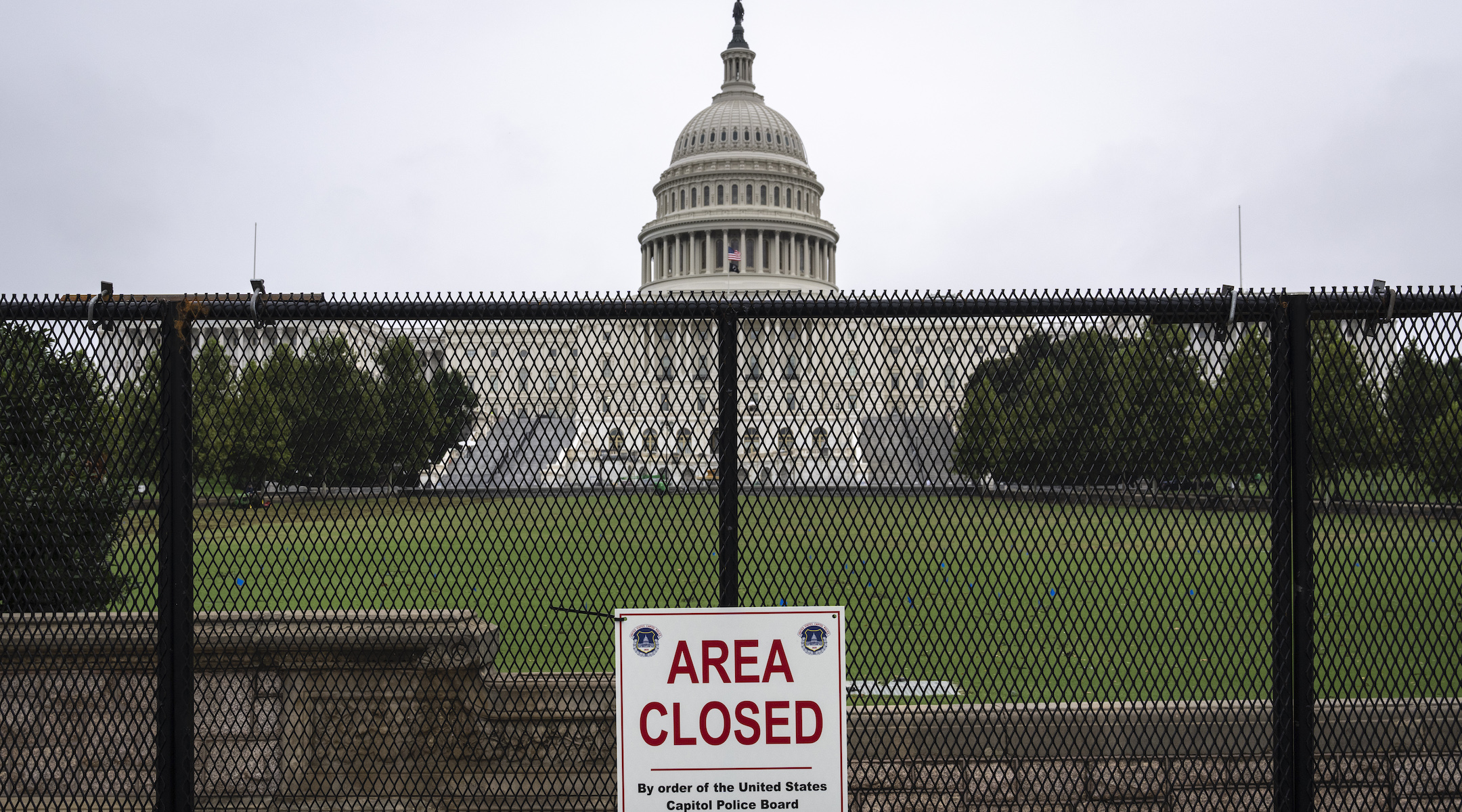 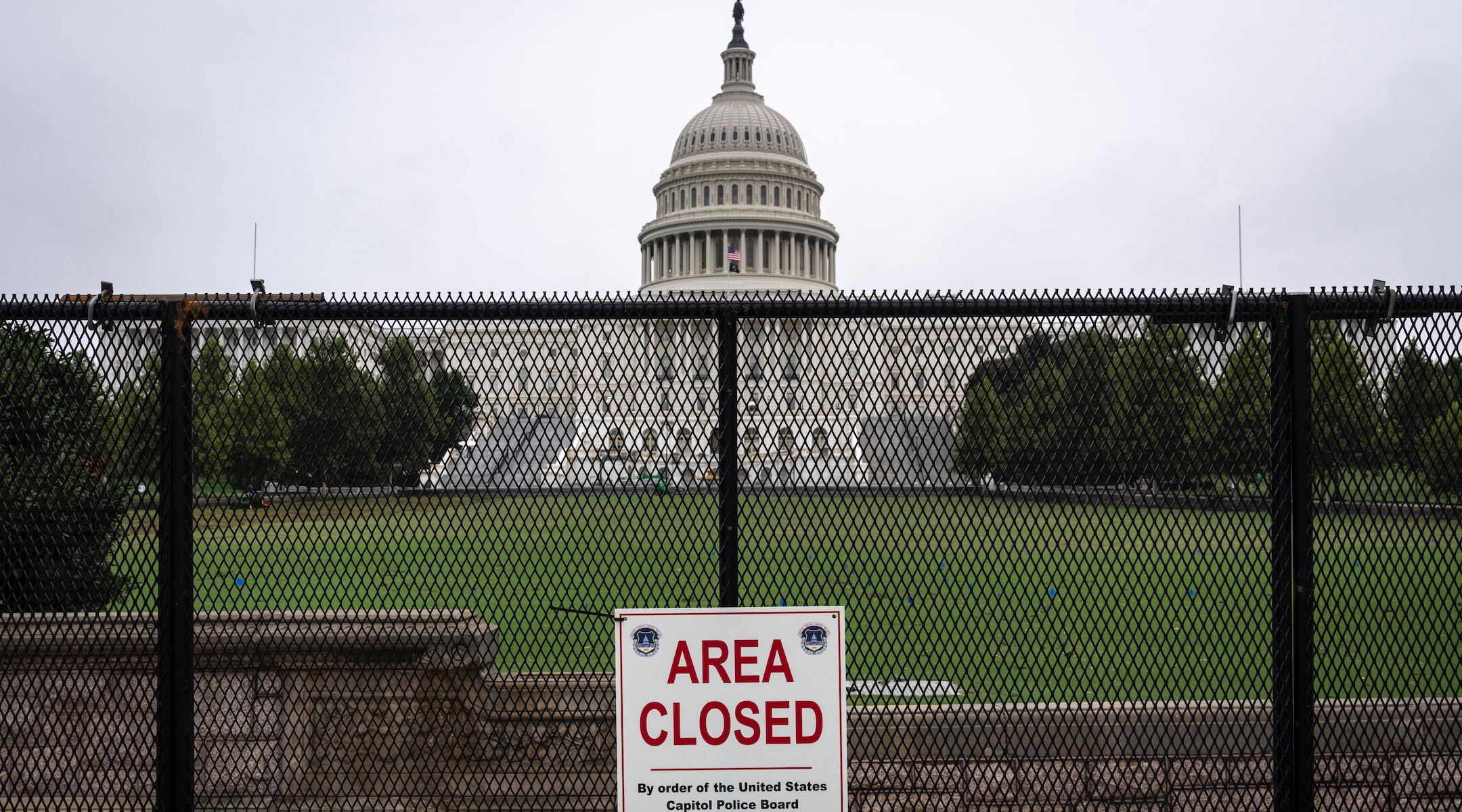 (JTA) — On the surface, a rally in Washington, D.C. planned for Saturday sounds like it will have echoes of Jan. 6.

The “Justice for J6” rally, which is being organized by former Donald Trump campaign staffer Matt Braynard, plans to gather in front of the U.S. Capitol and demand an end to what it calls “the tyrannical and inhumane treatment of the January 6 political prisoners.” Rather than a group intent on breaching the Capitol to reverse a democratic election, Braynard has said that all but a “few bad apples” in the insurrection were “nonviolent offenders” who didn’t think they were breaking the law.

Braynard has said his rally will not be violent, but police in the capital are on high alert and have mobilized all their personnel. But while local Jewish institutions are also bracing themselves for the possibility of violence, security officials say that Saturday’s rally is likely to be far smaller and less dangerous than the insurrection at the Capitol, which resulted in five deaths and more than 500 arrests.

“I don’t think it’s going to be like Jan. 6, not even close,” said Heidi Beirich, c​​o-founder of the Global Project Against Hate and Extremism, though she added that “we have no idea about lone actor violence.”

The crowd is going to number roughly 700, according to the official rally permit and police estimates — a far cry from the tens of thousands who showed up to rallies on Jan. 6. Unlike in January, when extremist groups organized to attend in groups, this time extremist groups are using messaging apps like Telegram to tell their followers to stay away, fearing arrest.

In January, President Donald Trump egged the rioters on, telling rallygoers to “fight like hell” and “to walk down to the Capitol” prior to their march on the Capitol. This time, he’s no longer in the White House, and is sending mixed messages. He said in an interview that Saturday’s rally could be “a setup” in which attendees will “be harassed.” But in a statement on Thursday, he endorsed the rally’s message, saying, “Our hearts and minds are with the people being persecuted so unfairly relating to the January 6th protest concerning the Rigged Presidential Election.”

But just in case violence breaks out, police say they’re taking extensive precautions, and have erected a security perimeter around the Capitol. After the January Capitol riot, police were faulted for not adequately responding to the threat, and the chief and second-ranked official of the Capitol Police stepped down. In March, one officer was suspended after a copy of the Protocols of the Elders of Zion was found near his work area.

“The chatter we heard prior to Jan.6, many of those threats turned out to be in fact credible, so we’re not taking any chances,” said J. Thomas Manger, the new chief of the Capitol Police. But regarding extremist groups, he added later, “We’re seeing mixed messages about whether folks are coming or not coming.”

Jewish security officials and extremism watchdogs say the same thing: That they’re concerned about potential violence, but that they aren’t aware of any specific threat to any Jews or Jewish institutions. A memo from the Department of Homeland said plans for the rally have included discussions of “using the rally to target local Jewish institutions, elected officials, and ‘liberal churches.’”

“Some of the online chatter has suggested that because the police force has been so tied up, it presents an opportunity to go after Jewish organizations or other houses of worship,” said Michael Masters, CEO of the Secure Community Network, which coordinates security for Jewish institutions. Masters added that there are currently no credible antisemitic threats that he knows of, but said, “There’s a general sense that we need to be enganged and proactive.”

For months before the Jan. 6 rally, security officials within and outside of the Jewish community issued a string of warnings about violence connected to the election and its aftermath. Immediately before Jan. 6, Jewish security groups worried about possible violence, though then they also said there were no credible threats toward Jewish institutions. And while Jews were not the target of the attack, it did attract neo-Nazis and other far-right extremists, as well as signs with a range of hate symbols.

“When you have organized groups that are basically telling people to stay home, that’s going to have an impact,” said Oren Segal, who heads the Anti-Defamation League’s Center on Extremism. “That doesn’t mean self-identified members of those groups won’t show up. It’s still possible, but unlike the chorus of voices we heard before Jan. 6.”

Even if it doesn’t lead to violence, Segal says Saturday’s rally still has troubling long-term implications.

“This is an event that is essentially portraying individuals who attacked the Capitol and our democracy as political prisoners,” he said. “When you’re talking about political prisoners and government overreach and the illegitimacy of accountability, those are all animating narratives for extremists.”

When the Clinic Becomes Part of the Carceral State – A former Rikers physician on unfreedom’s corrosive relationship to care.

The Overlooked Loyalties of Ethel Rosenberg – A new biography of the martyr captures the texture of her life and times but fails to fully investigate her political convictions.