The paper was written by Deepesh Patel, Editorial Director at Trade Finance Global (TFG), a trade finance platform, and Emmanuelle Ganne, Senior Analyst at the World Trade Organization (WTO), and it was endorsed by the International Chamber of Commerce (ICC).

Based on a survey of more than 200 actors in the field, such as banks, corporates, fintech companies, and industry associations, the paper looks into the main projects underway in trade, and discusses the question of initiatives moving beyond a proof-of-concept, as well as “the challenges that these new actors now face as we go past the trough of disillusionment and exploratory phase of DLT in trade.”

It discusses four main challenges and their solutions in more detail.

Meanwhile, if networks can cooperate, then it:

In September, research firm Gartner also said that interoperability issues and other factors may stand in the way of financial companies that want to utilize blockchain, which would see only well-established public blockchain platforms or enterprise solutions having a chance of cornering the market until at least 2022. “We expect no more than four standards to lead the market in the next three to five years,” Fabio Chesini, Gartner’s senior research director, said back then.

47% of respondents ranked the lack of standards as a big challenge, in 2nd place behind lack of legal clarity. Globalization leads to increased scale, which “without a degree of standardization, is a recipe for inefficiencies, particularly as the industry moves to become more digitized.”

While there’ve been a number of initiatives working on standardization, indicating greater recognition of the problem – such as blockchain-focused ISO/TC 307, ITU Working Group, and ICC DSI, or the WCO and UN/CEFACT that focus on the standardization of data models related to trade – inter-initiative harmonization is a must, while developing and maintaining a strong governance structure is key.

95% of respondents said legal clarity over ownership and jurisdiction of data and transactions is a challenge, with 65% of those saying it’s a big challenge.

“Navigating the legal environment seems to pose particular challenges for efforts towards trade digitization,” the paper says, with one such challenge being the lack of recognition of e-signatures and e-documents, despite the UN efforts. Furthermore, there is no computer or DLT algorithm that could determine if a transaction is a result of a legally enforceable contract. “There is nothing inherent about a DLT transaction that makes it legally binding,” says the paper. “This fact draws a sharp divide between the legally agnostic DLT utopia envisioned by some hype-curve riding enthusiasts and DLT reality.” Additionally, certain attempts at a solution have made DLT less secure.

“The core functionality of a blockchain, its immutability, seems to contradict with much of the growing global privacy legislation of today, such as […] the right to be forgotten,“ the paper states, as “the core of its value proposition, prevents data from being deleted.” This clashes with many countries’ legal requirements, but is an issue that is being addressed, the authors say.

The Commission Nationale de l’Informatique et des Libertés (CNIL), an independent French administrative regulator focused on privacy, collection, storage and use of personal data, suggested that the data processing and storing be done off-chain, while the data recorded on the blockchain should be a commitment only – “a hash generated by a keyed-hash function or a ciphertext obtained through “state of the art” algorithms and keys.”

The future of blockchain looks bright

Speaking about the widespread adoption of DLT within trade, 42% of respondents stated a positive outlook in five years’ time, but for the ten-year time frame, that percentage jumps to 73%.

A “collectively positive” perception of the state of the industry is seen at the 5-, 10-, 30-, and 50-year industry outlooks, says the paper, while the most positive one is the 10-year outlook, which could mean that the technology and its adoption will grow in the next decade. There is “a modest decline” through the 30- and 50-year views, gradually decreasing afterwards. “Perhaps this will be in light of the development of newer technology that could render DLT obsolete,” the paper concludes, stressing “the immense difficulty that exists in predicting what the next 50 years will hold.” 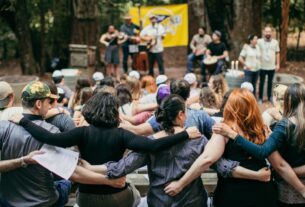 Jewish adult summer camp is back! Weekend getaway for Jews in 20s and 30s already waitlisted

Books of Sarah – In 2021, Jewish fiction grappled, in registers both tragic and comic, with questions of gender, power, and sexual politics.

Darkness in the Holy Land – An introduction to the Haggadah of the Black Panthers in Israel.