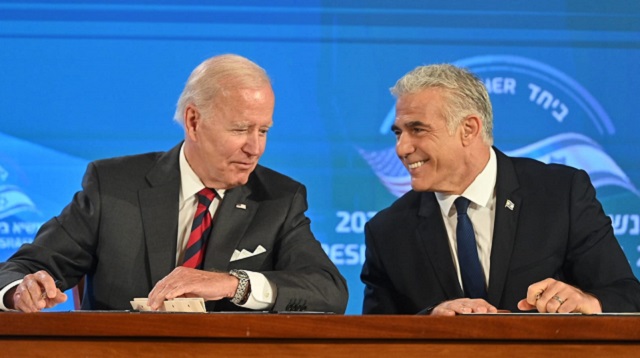 The leaders of the United States and Israel, President Joe Biden and Prime Minister Yair Lapid, signed a historic agreement on Thursday which reaffirms the “unbreakable” bonds between the two countries and the “enduring commitment of the United States to Israel’s security.”

Officially called the Joint Declaration on the US-Israel Strategic Partnership, it is also being called the Jerusalem declaration.

The declaration was signed at a time when both the world leaders are in need of a victory. Yair Lapid only just became the Interim Prime Minister of Israel a few weeks ago when the current coalition government lost its majority in the Knesset and was forced to call for new elections. Lapid’s predecessor as Prime Minister already announced that he will be quitting politics and seek another term in the Knesset in the upcoming November elections.

While Lapid desperately fights domestically to achieve a victory this fall, President Joe Biden is also facing critical elections in November. Today his Democratic party controls both houses of Congress, but polls show it losing at least one in the November midterm elections. Should this happen, the Republican Party promises to use majority control to investigate President Biden’s family and anything his administration has done in an open public hearing as a “payback” for the current Democrat led hearings into the Trump Administration’s alleged transgressions.

Showing strong support for Israel and achieving a big diplomatic win could help boost President Biden’s standings in the polls where his current popularity rating is sinking by the minute. And when the President is unpopular his party always does poorly in the midterm elections.

Another diplomatic win for Biden during his Israel trip was the signing of the new I2U2 partnership – I2 for the first letter in “Israel” and “India” and U2 for the same in “US” and “UAE” – established between the governments of India, Israel, the United Arab Emirates and the United States. The member nations said that the new initiative is meant to use the ”vibrancy of our societies and entrepreneurial spirit to tackle some of the greatest challenges confronting our world, with a particular focus on joint investments and new initiatives in water, energy, transportation, space, health, and food security.”

And then there is the historic flight that President Biden will make on Friday going directly from Israel to Saudi Arabia, something that would not have happened until recently. Previously, the President would have needed first to travel to a country like Jordan that has diplomacy with Israel before continuing on to Saudi Arabia. And rumors abound as to what might come out of the Biden Saudi Arabia visit.

As for the Jerusalem Declaration, it reaffirms the strategic U.S.-Israel partnership and states that it is based on a “bedrock of shared values, shared interests, and true friendship.”

“Furthermore,” it says, “the United States and Israel affirm that among the values the countries share is an unwavering commitment to democracy, the rule of law, and the calling of “Tikkun Olam,” repairing the world. The leaders express appreciation to former Prime Minister Bennett, who led the most diverse government in Israel’s history, and under whose leadership this extraordinary partnership has continued to grow stronger.”

The Declaration also holds the reaffirmation of American support for the defense of Israel is consistent with the “longstanding security relationship between the United States and Israel and the unshakeable U.S. commitment to Israel’s security, and especially to the maintenance of its qualitative military edge.”

The American government also pledged to prevent Iran from obtaining nuclear capabilities, calling this goal integral to the safety of the State of Israel. It further declared that America is prepared to use “all elements of its national power” to ensure that Iran never becomes a nuclear power.

The United States further affirmed the commitment to work together with other partners to confront Iran’s aggression and destabilizing activities, whether advanced directly or through proxies and terrorist organizations such as Hezbollah, Hamas, and Palestinian Islamic Jihad.

Prime Minister Lapid had a lot to say about the Iranian issue in his comments after the signing of the declaration. “Our way of life is what threatens them,” he said. “It’s what makes the Iranian regime develop its nuclear program, Hezbollah aims its missiles at us and terrorist organizations worldwide send suicide bombers. They want to destroy the only Jewish state in the world. We will never let that happen.”

“Words will not stop them, Mr. President,” Lapid added. “Diplomacy will not stop them. The only thing that will stop Iran is knowing that if they continue to develop their nuclear program the free world will use force. The only way to stop them is to put a credible military threat on the table.”

In addition, the US and Israel note that nothing better reflects the steadfast and bipartisan support of the United States to Israel’s security than the unprecedented Memoranda of Understanding on security assistance signed by successive U.S. administrations over the last few decades and that these arrangements demonstrate in word and deed that the United States considers Israel’s security essential to U.S. interests and an anchor of regional stability.

The US strongly supports implementing the terms of the current historic $38 billion Memorandum of Understanding in full, which honors the United States enduring commitment to Israel’s security, as well as its conviction that a follow-on MOU should address emerging threats and new realities. In addition, the United States is committed to seeking additional missile defense assistance in excess of MOU levels, in exceptional circumstances such as the hostilities with Hamas over eleven days in May 2021. Israel appreciates the U.S. commitment to the MOU and for providing an additional $1 billion over MOU levels in supplemental missile defense funding following the 2021 conflict.

While declaring their joint desire to see a peaceful final settlement negotiated with the Palestinians, both the US and Israel shared their condemnations of the recent wave of terrorism inflicted on Israeli citizens and of the terrorist groups themselves.

The United States and Israel affirm that they will continue to work together to combat all efforts to boycott or delegitimize Israel, to deny its right to self-defense, or to unfairly single it out in any forum, including at the United Nations or the International Criminal Court. While fully respecting the right to freedom of expression, they firmly reject the BDS campaign.

“The United States is proud to stand with the Jewish and democratic State of Israel, and with its people, whose uncommon courage, resilience, and spirit of innovation are an inspiration to so many worldwide,” reads the Declaration.

In this same spirit, the United States and Israel affirm their commitment to continue their shared and accelerated efforts to enable Israeli passport holders to be included in the U.S. Visa Waiver Program as soon as possible, as well as their support for increased collaboration on operational cyber exchange and on combatting cybercrime.

The leaders state that all of these initiatives, and countless other joint endeavors, undertaken between their peoples at every level of government and civil society demonstrate that the U.S.-Israel strategic partnership is indispensable and makes an outsized contribution not only to the good of American and Israeli citizens but also to the good of the Middle East and of the world. 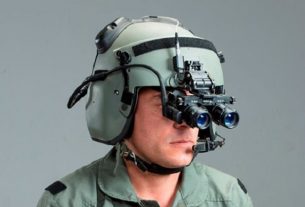 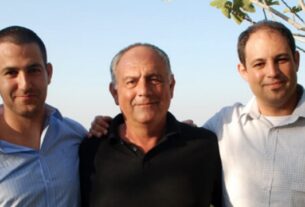 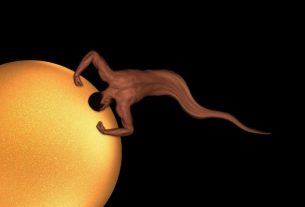 Human eggs prefer some men’s sperm to others, study