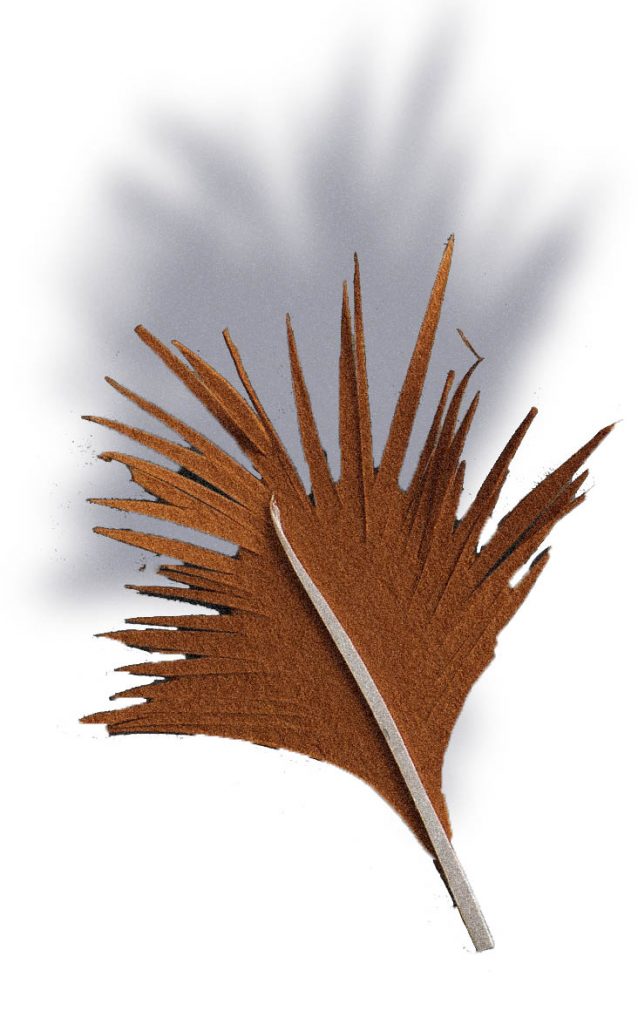 Translated from the Hebrew by Yaron Kaver

This short story appears in our Spring 2021 issue. Subscribe now to receive a copy in your mailbox.

LATE LAST NIGHT, a bird ate Mom’s pansies. I was sitting on the sweltering radiator by the window, trying to count fifty passing cabs. Maybe I’d see Marco’s car, back from his trip. Sometimes he’d do that, come home in the middle of the night, when he thought no one was watching.

The bird landed, and I lost count and forgot about Marco. I watched her eat the flowers. She had black watermelon-seed eyes and a pointed crest. Her body was soft and gray, like a mouse with wings. She seemed rare, like she’d traveled far. I didn’t know if she’d gotten lost, come here by accident, or if she’d made up her mind to be here even though she knew this was no place for her. Maybe she was just tired and had stopped here on her way somewhere else.

I wanted to touch her. I’d never held a bird in my hand. I thought of opening the window, but I didn’t want to scare her off. I let her eat the pansies in peace. After she was done and gone, I checked to see if she’d left a feather behind for my collection, but there were no feathers in the flowerpot.

This morning, I told Mom I wasn’t feeling well, that I had to stay home from school. She took my temperature and said I was completely fine. I stayed in bed. She said she had a lot to do today, that she had her job, and school was like my job, and each of us had to go her own way, take care of her own business. Back in Israel, I knew she’d be going off to act; I’d seen her on stage. Ever since we moved to New York, I had no idea what she did after she dropped me off at school. She said one day I’d understand.

Now Mom is pouring what’s left of her tea into the flowerpots. It’s not exactly leftovers. She brews a big pitcher on purpose, enough for herself and the flowers. She wants them strong enough to withstand the wind, the snow, the cold—to survive the winter.

There are two flowerpots, one on the outside ledge of each window of our two-room apartment. The super has told her a bunch of times to move them inside. He always says it’s against the law, that if a flowerpot falls off the seventh floor it could kill someone, and then she’ll go to prison for manslaughter. Mom just laughs. She doesn’t think much of the super. Flowers love fresh air, the radiator heat will kill them, even I can barely breathe in here, she says. She brings the flowerpots in for a day or two, then puts them right back out again. I’m scared she’ll get in trouble. Marco said, no more getting in trouble.

When Mom brings the tea over to her flowers, she notices some of them are gone, some are just stem and leaves, some have petals left hanging with bite marks. She’s surprised and angry. She paces the apartment. She’s got a feeling she knows exactly which bird did it, too. It was fluttering around yesterday, near the window, came right up to the flowerpot while she was pouring tea for the pansies. Mom says she shooed it away, but it looks like the bird marked her flowers and came back at night, when we were all sleeping. “That little bastard. And it’s no pigeon. This wasn’t your typical New York bird. Some birds, they migrate places where they don’t belong, isn’t that right?”

“Maybe you’d know what this bird is called and where it came from. You know every bird in the world.”

I don’t say a thing.

Mom says as long as I’m staying home, the least I can do is make myself useful. My job is to save the flowers from the evil bird. She asks me to make a scarecrow.

The intercom buzzes. Mom tells me she’s invited Ossie over for tea, and that the two of them have serious things to discuss. Ossie and Mom were not on speaking terms for a very long time. I never really knew what the fight was about, only that it had something to do with money and some other thing. They only recently made up.

Mom says I should say hello politely and then go to the other room to make the scarecrow.

Ossie stands in the middle of the room, pale and tall. Mom tells her about the bird that ate the pansies.

“Pansies, oh yes, those flowers are super healthy,” Ossie says. “They’re good for the immune system, good for your heart. If you crush them up and mix them with white vinegar, it’s fantastic for your scalp.”

“I didn’t know about the scalp.”

Mom rips out a couple of flowers and hands them to Ossie.

Mom says it’s none of my business, and that I’m not even supposed to be home right now. She promised Ossie this would be “grown-up time.” She used to say I care more about birds than I do about people, and that it’s not okay. I’d tell her she’s the same way with flowers. She’d say that’s not the same thing.

I go to the other room.

I hear Ossie asking, “Why is she home from school? Is she sick?”

“What grade is she in now? Second?”

“Of course not. Fifth. She’s just really small. The doctor says she’s off the chart. She was always like this, ever since she was born. But it’s getting to be a real problem. The doctor says if she doesn’t make it onto the chart in the next six months, we’ll have to do something about it.”

I sit down on the radiator and look outside.

I hear Mom ask Ossie what happened with Isaac. Ossie says it ended, and it ended very badly. He was so warm and affectionate—in love, he actually talked about love—and then he turned into someone else. It’s scary how people turn on you. He called her, dumped her over the phone. After everything they had together—a ten-minute phone call, and that was it. Nothing since. And this city, you could just disappear, poof, never hear another word, never understand any of it. Like she never existed in the first place. And it stays open, unresolved.

“How did he take the baby thing?”

“He screamed at me. Said I tricked him. And that he’d pay for it, just as long as we got it over with fast. And he sent me a contract. The contract, that really killed me.”

“Don’t do it, Ossie. I know the circumstances are bad, and it’s not how you imagined it would be. But this is your shot. You might not get another chance.”

“Another chance at what? Look at what it’s done to your life.”

“What is that supposed to mean?”

I look out at the flowers. Their soil still damp from the tea. I move over from the radiator to the windowsill. I’m halfway in, halfway out. The heat of the radiator, the cold of the outdoors. My body, half-freezing, half-boiling. I can’t feel my head.

“Don’t take it to heart, Ossie. Something good will come along eventually.”

“I’m not old, but I’m on the verge. I can feel it. Don’t you feel like you’re on the verge? Used to be, back home, if I got my heart broken, I’d get right back up, my body would turn into a revenge machine, just like that. In bed, on stage. Now I feel like I’m getting tired. Something inside me is broken. I don’t have that weapon anymore. All my body wants now is comfort, rest, affection, and there is none. There’s nothing. And every man like Isaac . . .”

“You know what it’s like, when you’ve got the stage. And what it means, losing the stage. We had Jean Genet, we had walking out on stage, taking our clothes off, telling everyone, my heart’s in my hand, and my hand is pierced, and my hand’s in the bag, and the bag is shut, and my heart is blocked.”

“The heart. It’s caught. My heart is caught.”

“What difference does that make? A caught heart, a blocked heart. What are we supposed to do with all that now? No one sees us anymore, no one listens. We can’t fall apart in front of an audience, can’t do Jean Genet. We’re just stuck with all of it.”

I slide onto the flowerpot. I can’t feel the radiator’s heat anymore. The flowerpot sways under my weight as my legs dangle.

I see the bird. She’s in the air, moving in, staring at me. She lands on the windowsill. She comes closer. Looks like she’s going to peck at me. I grab the sill and retreat back inside, onto the radiator. She doesn’t do a thing. I pick a pansy and hold it out. The bird eats out of the palm of my hand. I’m scared Mom will walk in. Scared the bird will pierce a hole in my hand. I can feel her beak. But it isn’t making a hole. And Mom doesn’t come in.

“It’s a person who’s decided to come into the world, Ossie. Don’t stop him, or her. It could be a daughter you’re having.”

“What are you, a Republican all of a sudden? I think he’s a Republican, too. And he’s a Christian. How did I get myself mixed up with a Christian hedge fund guy? What is wrong with me?”

“It’s got nothing to do with Republicans. Oh, did I tell you that Marco is going to vote for Reagan? It’s his first time voting here, and he’s voting for Reagan. How does a person go from Peace Now to Reagan?”

“The last thing I need right now is a mini-Isaac growing inside my body and then taking over my life.”

“Whatever. It’s too late anyway. I took the pills.”

“What do you mean, pills? Since when can you do it with pills?”

“It’s a new thing. No procedure, no nothing. But the bleeding is worse than they said it would be. It’s not stopping.”

“Oh, no. You do look pale, now that you mention it. How about I make you something to eat?”

“I can’t eat anything. I’m sure it’ll stop soon. Anyway, I should head out. Can’t sit here all day on Marco’s chair and bleed.”

“On a road trip. I’m guessing up north, New England, like it isn’t cold enough down here.”

“I’m not sure. But I bet sometime soon.”

Ossie leaves. I hear her footsteps down the hallway, then the elevator door sliding open and shut. The bird is gone from the flowerpot. I look for her up in the sky. She’s not there. I bend over, look down. I see Ossie leaving the building, walking down the street. She tightens the belt on her gray coat, takes quick steps, her arms crossed, hugging herself. No sign of blood. I get off the radiator, out of the room.

“Hey. Ossie left. Are you all done with the scarecrow?”

“Yes, just give me a second,” she says. She takes Ossie’s cup of tea and heads over to the other room, to the flowerpot in the window.

Dea Hadar is the award-winning author of the short story collection Sweet Dreams, Isawiya and the novel Still Morning. She is a former journalist and columnist for Haaretz.

Yaron Kaver is an Israeli American translator, writer, and musician. 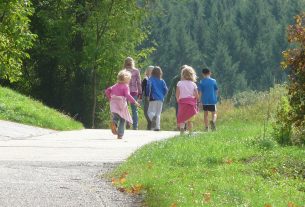 Die Schreibblockade: Selections – “I have returned to the city of my dead. / It is the living who live there. I do not know them.”