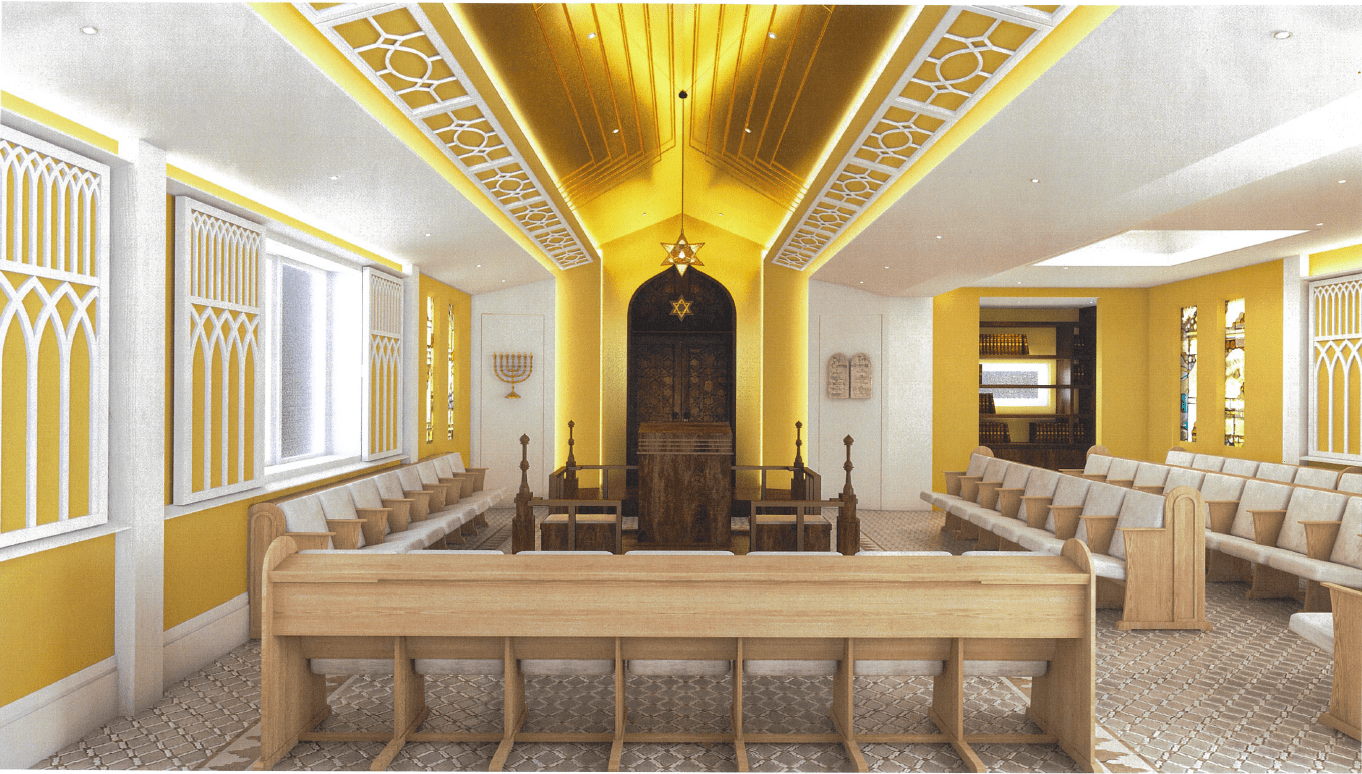 (JTA) — Seven years ago, the lone Chabad rabbi in Taiwan reached out to Jeffrey Schwartz, a Jewish businessman and philanthropist who had helped fund the country’s small Jewish institutions for years. The rabbi, Shlomi Tabib, was wondering if Schwartz could fund the construction of a mikveh, a ritual bath in which Orthodox women immerse every month according to ancient tradition.

There was a problem: Schwartz, who had lived in Taiwan for decades after growing up in a Conservative community in Cleveland, didn’t know what a mikveh was. Once he learned, he believed there were not enough Orthodox residents in Taiwan to justify the construction costs, especially not when the region was still lacking a physical worship space.

“He said it’s more important than [a] temple,” Schwartz recalled. “He said Orthodox women need them every month. I said, ‘Well, how many Orthodox people are there here that need it?’ He said maybe one or two or three.

“I do a lot of philanthropic work here in Taiwan, and I said, ‘There’s a long list of people way ahead of you to get my money,’” Schwartz said.

But fast forward seven years, and Schwartz is getting ready to open Taiwan’s first-ever Jewish community center: a $16 million dollar complex spreading 22,500 square feet and featuring a 300-person ballroom, kosher restaurant, classrooms, Judaica museum with items from Schwartz’s personal collection — and a synagogue led by Tabib, along with that once-contentious mikveh, complete with a gold leaf ceiling and mosaics custom made in Lebanon.

The Jeffrey D. Schwartz Jewish Community Center, which was officially announced on Wednesday and is slated to open in December in Taipei, was designed with help with Schwartz’s wife, Na Tang, a Taiwanese musician and actress. Tabib and his family will live on site. 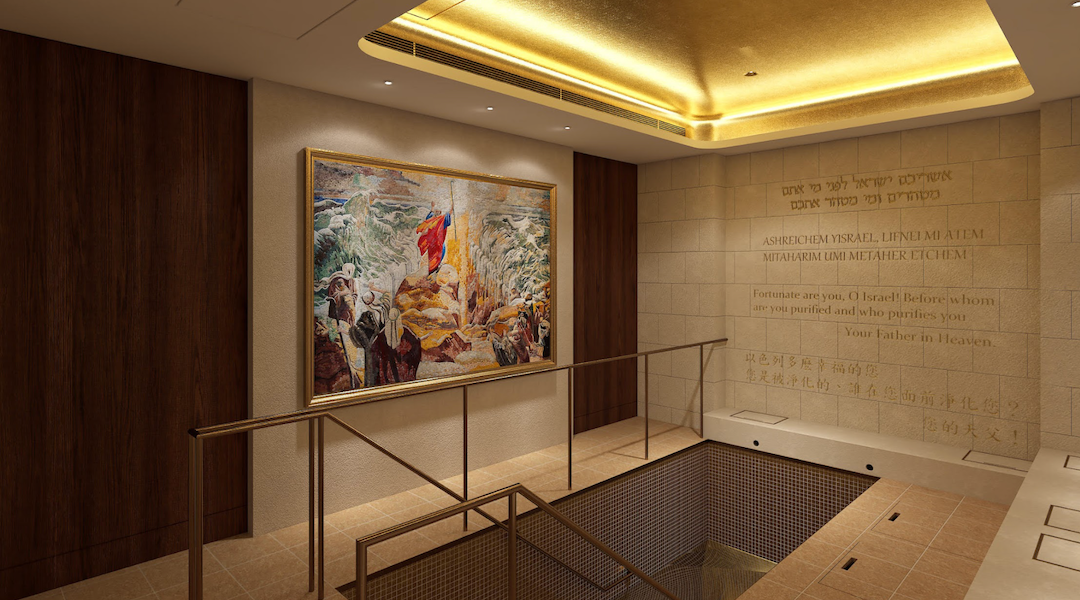 A rendering of the center’s mikveh, with gold ceiling and gold lettering. (Courtesy of The Jeffrey D. Schwartz & NaTang Jewish Taiwan Cultural Association)

Schwartz hopes the center will be a beacon of Jewish culture in a country of 23.5 million that has not historically had a large Jewish population. Estimates of the current number of Jews in Taiwan run between 500 and 1,000. For decades, they’ve come together in small makeshift spaces for services and social events but have lacked a large central meeting place. In the 1970s and ’80s, before the bulk of the region’s manufacturing moved to China, Rabbi Ephraim Einhorn — now 102 — hosted services for traveling businessmen in a hotel room.

“I said, with all these years that I’ve devoted to Taiwan, I need to build a legacy for the Jews,” said Schwartz, who has lived in the island nation for nearly 50 years since graduating from college. He founded a business in 1975 that has grown into a conglomerate of companies offering supply chain services. “When next generations come out, they’re going to have a place that they can be proud of, that they can understand you can still be Jewish in Taiwan and still be part of the Taiwan community.”

Schwartz’s center is not affiliated with the Taiwan Jewish Community group, which he had previously been a member of for decades. Since the pandemic, the community has grown into a vibrant and active community of expat Jewish families and Taiwanese locals curious about Judaism. Recent dinners and holiday services — run by a 34-year-old artist-turned-non-ordained-rabbi-cantor who sings and incorporates instrumental music — have drawn hundreds of people.

But since the 1990s, the non-denominational group lacked high attendance and verve at its holiday services. Schwartz respected Einhorn, who is still a member of the community, but could not envision him leading the new synagogue.

“A community needs a rabbi. I was either going to go out and hire a Conservative or Reform rabbi and bring them out from the states to Taiwan, and then it dawned on me one day — I don’t want to go into competition with a rabbi here, and steal from his flock, so to speak,” Schwartz said.

The local Chabad already met his needs on that front: “[It] has a nice following of people, you know, a mixture, and there’s very few Orthodox — mostly secular people — and great events, and is open to everybody.” 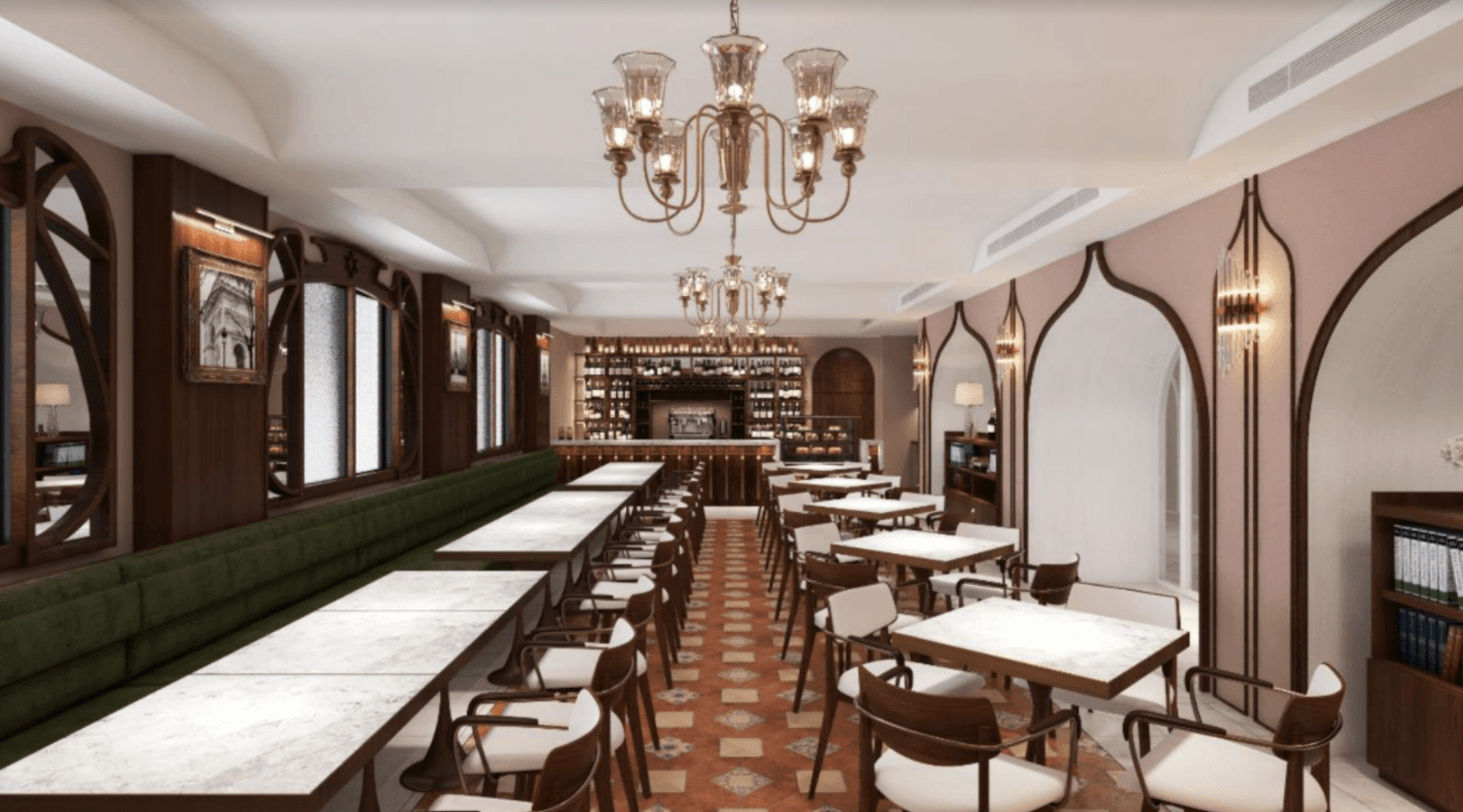 Schwartz says he is still on friendly terms with the Taiwan Jewish Community group and hopes their members attend the many events he plans to hold in the center’s ballroom space with traveling speakers and thought leaders. Links between the two Jewish hubs are unavoidable among such a niche population: Glenn Leibowitz, the new center’s head of communications — who during the day leads consulting giant McKinsey’s communications team in the greater China region — has been friends with Ben Schwall, who heads the Taiwan Jewish Community, since the two went to college together around 30 years ago.

Leibowitz estimated that Tabib’s local Taipei following numbered in the hundreds, in addition to Jews traveling through the country who often stop at the local Chabad outpost for services or kosher food. But Schwartz was until recently skeptical of the Chabad way of doing things. At first, he thought the Hasidic movement’s strict adherence to Jewish law wouldn’t make for a  comfortable situation for the intermarried couples and less religious Jews Schwartz hoped to attract.

He compared the concept to a hospital in which not all patients would receive the same treatment.

“If I need a doctor, the doctors there aren’t gonna see me, [I’d] have to go to the place down the street,” he said.

But a pivotal moment came a few years ago during a Holocaust remembrance event that featured non-Jewish dignitaries when Schwartz watched Tabib passionately recite a prayer. That’s when he knew he wanted the Chabad rabbi involved in his project.

“The Chabad rabbi dressed in his black suit and black hat got up … I said, you know, everybody in the audience here, they see that that’s a Jewish person. It’s a symbol of a Jewish person,” Schwartz said. “If you’re building something for the long term, you need some consistency. And I’m not going to be here for the consistency. But I know the Orthodox side of it will keep it going … I’m happy that I have the Chabad as a partner because I know in 100 years, they’re going to be still doing the same thing.”

Tabib said Schwartz’s offer — “You’re going to run the shul, and the mikveh, and anything having to do with religious, but everything else, I’m going to run.” — was a literal answer to his prayers. 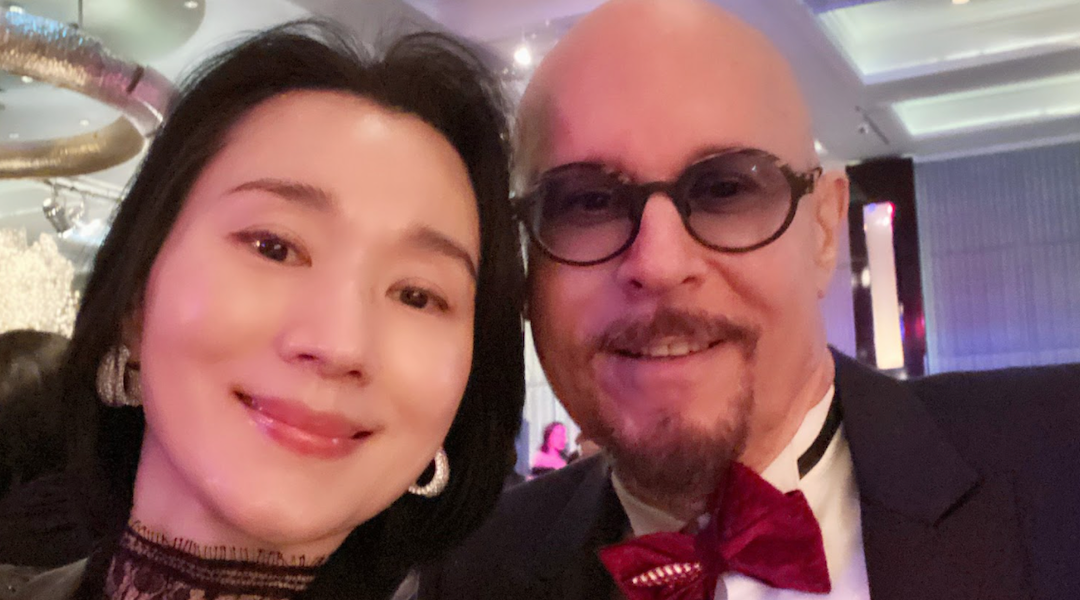 “Jeffrey and I come from different backgrounds and [do] not always see things in the same light. Nevertheless (or perhaps because of that) I feel this cooperation is bound for great success,” Tabib wrote in an email. “Jeffrey is very sincere and genuine, and when he shared with me his idea I felt like my prayers were indeed answered. We are both motivated and are interested in the success of this project not only for us but for the future generations G-d willing. Once we came together and discussed, we realized the question shouldn’t be ‘if’ but ‘how.’”

Collaboration between Taiwan’s religious and secular Jewish communities was necessary in this instance, Tabib said, because “if someone wanted to build a center in Taiwan only for religious Jews, they would probably be going out of business quite quickly.”

Schwartz has even come around to the ways of Chabad services, calling them “beautiful.” But the mikveh remained a logistical challenge on his end: The ritual baths cannot contain drains, and that confused the Taiwanese engineers Schwartz works with.

“I’ve learned everything you need to know about mikvehs that you were afraid to ask,” he joked. “I put a lot of work into this place. I want this whole center to be a monument to the Jews and Judaism. Because I know that if I take the Chinese to a rented apartment and say this is [where] we’re to celebrate, they’re gonna say, ‘Okay, don’t call me next time.’ I want [this] to be something that we all can be proud of.” 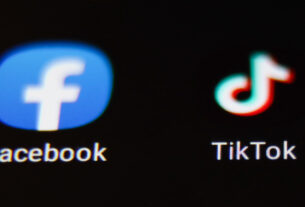 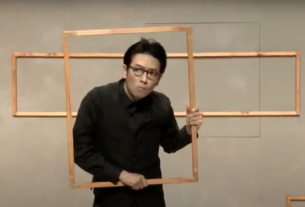 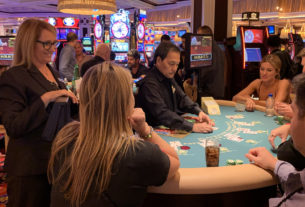