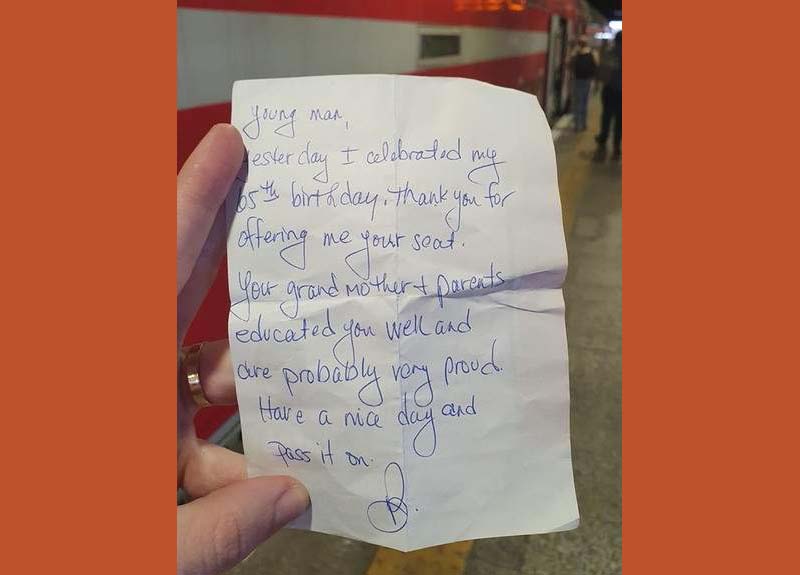 Last week, as usual, Haifa resident Yaniv Rosen made his way back home from Tel Aviv on the train, and noticed an older woman who was standing in the aisle, unable to find a seat. He quickly gave her his seat and remained standing for the rest of the trip.

“For me, there was no question here, it was obvious that I would give my seat to the older woman,” Rosen told Channel 12 News. He added: “She was nice, but didn’t say anything to me. We didn’t exchange a word during the whole trip.”

When the train arrived in Haifa, the woman got up, and just before leaving she stuck a note in Rosen’s palm.

“I thought maybe I dropped something out of my pocket, but when I opened the note, after she had already gotten off, I found a short letter in English that really touched me,” he said.

“Young man, yesterday I celebrated my 65th birthday. Thank you for offering me your seat,” the woman wrote. “Your grandmother & parents educated you well and are probably very proud. Have a nice day and pass it on, R.”

Thrilled, Rosen posted the letter on Facebook, hoping to raise awareness of the issue – and no doubt succeeded, after his post had received thousands of likes, shares and grateful comments from fellow riders, especially from older passengers and pregnant women who shared their personal experiences.

Rosen, a business development manager at a startup, has long been advocating giving one’s seat on the train to needier fellow passengers. “It’s a very busy train, and I often find myself giving my seat to older people or pregnant women, that’s how I was raised,” he said.

Rosen noted that not everyone follows his example. “There are cases of indifferent soldiers or just civilians putting luggage, bags and weapons on the seat next to theirs, who don’t pay attention to older people or pregnant women, don’t give them their seat and continue to sit and tinker on the phone. It upsets me, and I’ve made remarks to them in an attempt to raise their awareness.”

Rosen has turned to Transport Minister Bezalel Smotrich (Yamina), who promised him to raise awareness among train riders.

“Young people today are busy with themselves and other things, less concerned about values ​​and respect for others,” Rosen said, adding, “My goal is to raise an interest, learn to respect, not be indifferent and selfish.” 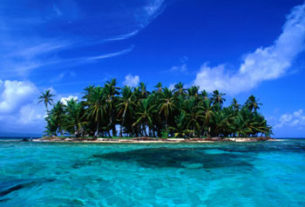 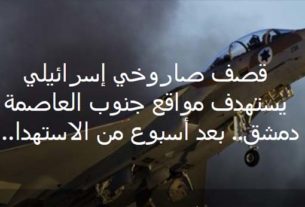 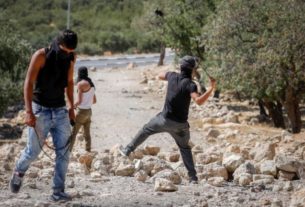